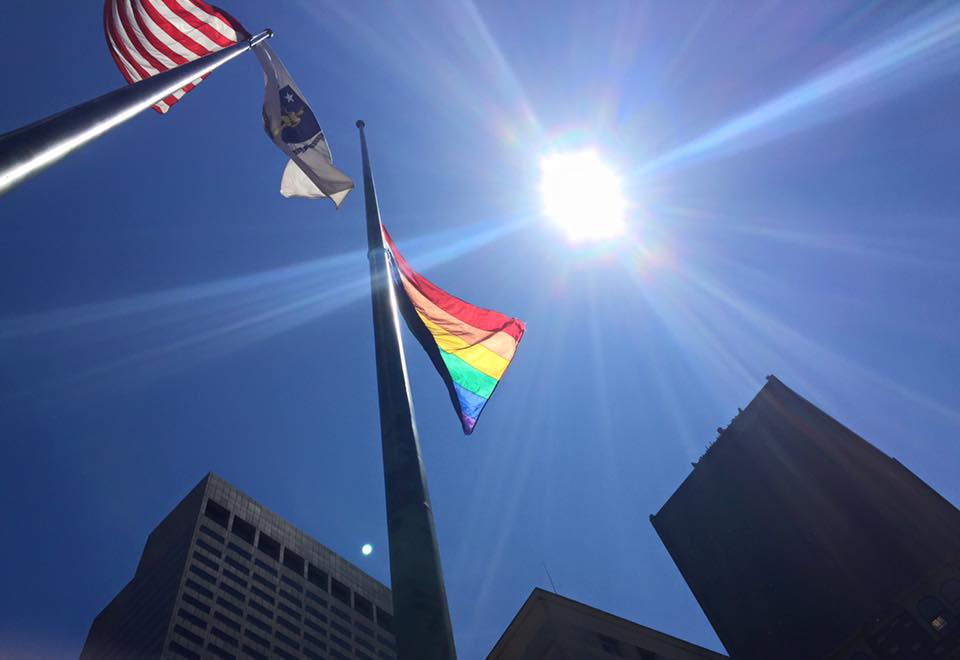 Mayor Walsh read the official Boston Pride Week proclamation, flanked by LBGT Community Liaison to the Mayor’s Office Jullieanne Doherty and Sylvain Bruni, President of Boston Pride. During his speech, the Mayor talked about how proud he was of Massachusetts for its global leadership in the fight for marriage equality, in America and around the world.

The late Boston Mayor Thomas M. Menino, a fierce ally of the LGBT community, was named Honorary Marshal, with his daughter Lisa accepting in his name.

Boston Pride Parade Grand Marshal Erica Kay-Webster spoke to the crowd at City Hall about her experiences as a veteran of the Stonewall Riots and a transgender woman.

Parade Grand Marshal and Stonewall veteran David Velasco Bermudez read a letter of support he received from President Barack Obama and talked about being the first Stonewall vet to marry in Massachusetts.

Marshal Woody Glenn, co-founder of the Bisexual Resource Center, greeted the crowd and announced the 30th Anniversary of the Center.

Marshal Ellyn Ruthstrom, former President and current Treasurer of the Bisexual Resource Center, spoke about the importance of bisexual visibility both outside and within the LGBT community.

At the end of the ceremony, the LGBT Pride Flag was raised high above Boston City Hall for all to see.

Happy Pride to all! And don’t forget – Fenway Health will be marching in the Pride Parade on June 13! Won’t you join us?