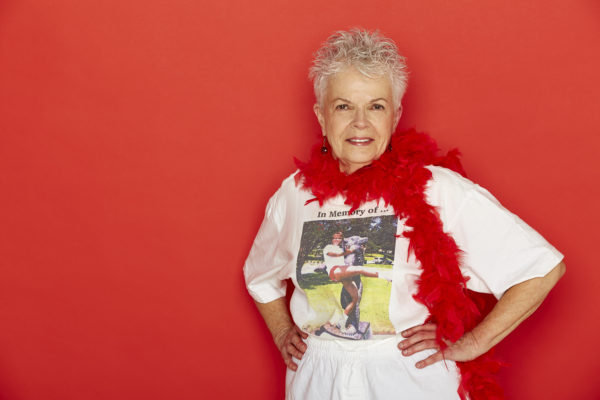 Inez Folsom has been volunteering with AIDS Action since the first AIDS Walk Boston in 1987, and has raised tens of thousands of dollars in her more than thirty year career. But for Inez, AIDS Walk was always more than a walk, or a fundraising opportunity – it was a way to connect with others whose lives have been deeply affected by HIV/AIDS and build a community of solidarity and understanding.

Inez recalls one year when she was walking with a small group, but was separated from them and completed the Walk alone. But she wasn’t really alone, she explained, because “it’s easy to strike up conversations with other people – there’s some way that we’re all connected because we’re doing this!” Even today, Inez maintains a close relationship with other volunteers and staff members at AIDS Action. Through participating in the AIDS Walk, she found that “you get to meet people who really care…it’s nice to make connections, so you’re making good connections with good people.”

The community she formed with AIDS Walk Boston continued to support her in 1992, when Inez tragically lost her son after a long battle with AIDS. Since then, volunteering with AIDS Action has become a more personal endeavor and a way to honor and remember her son. “I tend to be for the underdog,” Inez said, “and it seems like even now, there’s a stigma with people who have AIDS. And we don’t talk about it…people are just not acknowledging what it means.” Inez is still working toward a future where there is zero stigma, and zero cases.

Inez worries that those affected, like her son, must suffer in silence, even decades after the height of the HIV/AIDS epidemic. “The press hasn’t really given it much attention,” she said, both when her son was ill in the early 1990s and today. Inez continues to walk 30 years later to continue to reduce the stigma and advocate for those affected. In 2016, AIDS Action honored her decades of commitment by naming Inez the recipient of the Bette Byrnes Award at that year’s Walk.

A few years ago, Inez considered retirement from her long career at AIDS Walk. But she soon discovered she couldn’t imagine life without it. “I couldn’t not do the walk,” she said, “I don’t care if I can walk or not, I’m going to be involved with the walk –I just have that connection.” Inez is still walking, still fundraising, and still working to advocate for those who have been affected by HIV/AIDS.

Join Inez in the fight against HIV/AIDS by registering for AIDS Walk Boston 2020.