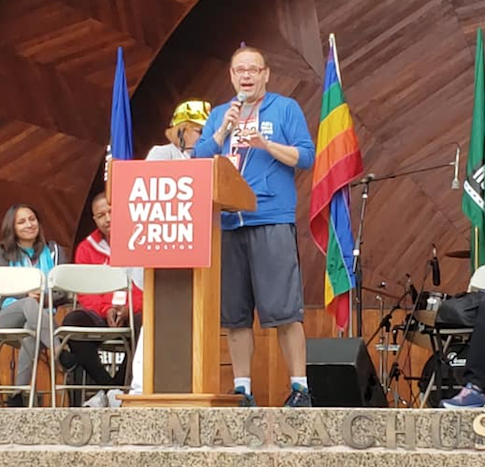 In 2011, on the recommendation of a coworker, Kelly signed up for AIDS Walk Boston. He completed the walk by himself – his coworker was a runner – and raised over $3,500. Since then, Kelly has helped raise over forty thousand dollars for AIDS Action through AIDS Walk. But it was always more than a fundraising effort.

Kelly remembers the 2011 AIDS Walk as “the first time I disclosed to a large group of people outside my immediate circle of friends that I was HIV positive.” Kelly describes this as a sort of “closet” to come out of, “because the closet is all these fears about these things about you that you think people are going to react negatively to.” Coming out of this closet was scary, he says, because “I was afraid that other people wouldn’t love me, that they would think there was something wrong with me.”

But through AIDS Walk Boston, Kelly felt supported and affirmed in his identity by those around him. A prolific fundraiser, he felt personally encouraged by the fundraising goals he was able to achieve. “The fact that [my friends] were willing to send often significant amounts of money…that outpouring was one way for me to remind myself and the world that there is no shame in being HIV positive,” Kelly said. More than that, fundraising for the AIDS Walk has allowed Kelly to understand and learn that being gay and HIV positive “is actually a source of strength, because it allows me to speak for those who are too afraid to speak for themselves.”

Last year, AIDS Action awarded Kelly the Betty Byrnes Award for his continued support for AIDS Action through AIDS Walk Boston. After years of extensive fundraising, he explains he was “looking to retire, but had this strong AIDS Walk brand, if you will, [from Walk team] ‘Divas & Devils.’” So, Kelly invited some of his teammates from the Boston Ironsides Rugby Football Club to the walk, and made a new team – Divas & Devils of the Boston Ironsides RFC. Kelly was nervous at first. “Honestly, I wasn’t sure it was going to live on after me, or if they were just humoring this guy who supports them,” he said. But after the team crossed the finish line, he remembers sitting under a tent and listening to his teammates discuss plans for the Walk next year. It was then that he knew his team, and his legacy, were in good hands. “I think that has been the best part,” he said, “Understanding that I’ve done the work, and there’s other people who want to carry it on.”

Carry on Kelly’s legacy and work to put an end to HIV/AIDS by registering for AIDS Walk Boston 2020 today.