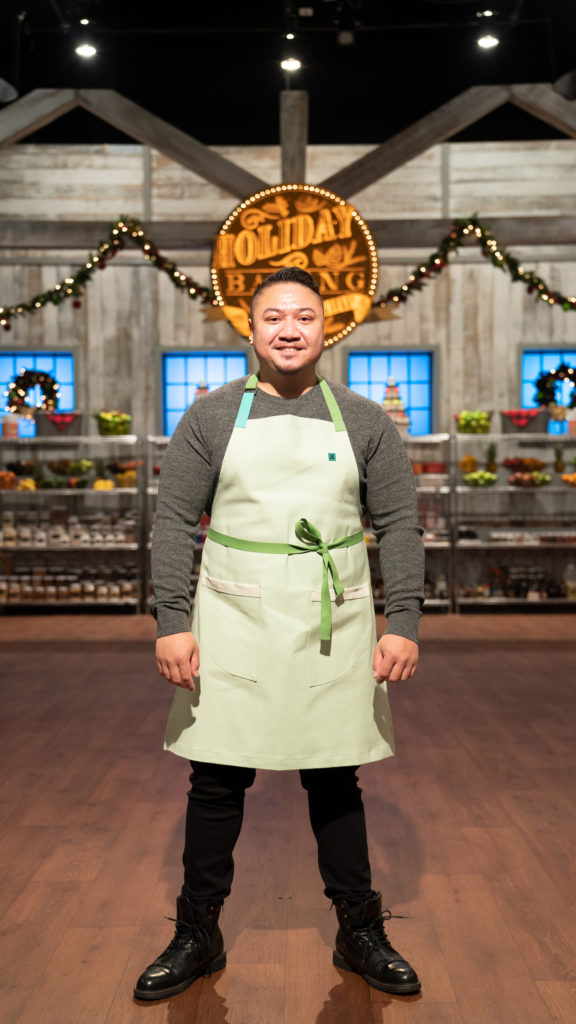 The holidays are just around the corner and here at Fenway Health, we already have something to be cheerful about: One of our own is starring in a fun and festive TV competition! Kobe Doan, Patient Account Representative on our Dentistry team, is a contestant on this season of Food Network’s The Holiday Baking Championship.

Now in its sixth season, The Holiday Baking Championship features 10 bakers from across North America who all have two things in common: they love the flavors of the holidays, and they came to win. The contestants compete in weekly challenges where they must showcase their baking, decorating, and creativity before a panel of judges. Each episode, the baker with the lowest-scoring creation goes home, until the last one standing in the kitchen receives $25,000 and the title of Holiday Baking Champion. Sure beats a fruitcake!

We recently chatted with Kobe to learn more about his love of baking and how he landed on The Holiday Baking Championship.

So Kobe, when did you discover your love of baking?

I first discovered this about two years ago when I decided to try to bake my own version of the lemon bars from a popular Fenway neighborhood cafe. I brought them into work and everyone loved them. I loved seeing people eating and enjoying what I made, so I just kept doing it.

How did you find out you were going to be on The Holiday Baking Championship?

The producers actually saw my Instagram account and contacted me on there to ask if I wanted to be on the show. I thought it was fake at first! I’m in a baking group, so I showed the message to them and asked if anyone had ever received something similar. One person said yes, one of their friends got on a different show that way, so I decided to respond. It’s so unreal. You never expect something like this to happen, especially when you’ve only been baking for a couple of years.

Well, your Fenway Health colleagues have been fans of your baking for quite a while! Which of your creations has been the biggest hit in the office?

My macarons. I actually brought some to work and one of our dental hygienists said they tasted better than the ones she had in Paris.

What is your biggest challenge in the kitchen? What do you think you do best?

My biggest challenge is trying to perfect my recipes. I’m my own biggest critic. I’m always trying out new ways to do things and researching new flavors. As far as what I do best in the kitchen? I think I cook better than I bake! I’m a Jack of all trades in cooking. I like to make everything, and can go from Italian to Asian to even Portuguese. I like to try out everything at least once.

Do you have a favorite holiday memory?

Cooking for the family I have now. Growing up, I never had those cheerful holiday family experiences. But now that I’ve created a family with my partner, I’m able to have holiday parties and host people, which is exactly what we did last Christmas. We hosted my partner’s mother and grandmother, and a few of our friends.

If you could only eat one baked good for the rest of your life, what would it be?

That’s a funny question, because I don’t actually really like sweets! My partner is the one who eats my pastries, and I can always tell if they’re good based on his reactions. But give or take, if I had to eat one pastry, I think it would be brownies.

And finally, how many jokes do you hear about being a baker working in a dental office?

This season of The Holiday Baking Championship premiered on November 4 and airs through December on Food Network Mondays at 9:00 PM ET/PT.

For more baking fun, three previous runners up are back in the baking championship kitchen to prove their skills can rise to the top on the new one-hour special Holiday Baking Championship: Sweet Revenge at 10pm ET/PT. Host Jesse Palmer also offers up tips on how to survive the madness of the season while sharing highlights, amazing desserts and hilarious banter from past seasons on Holiday Baking Championship: Holiday Survival Guide on Monday November 11th at 11pm ET/PT.