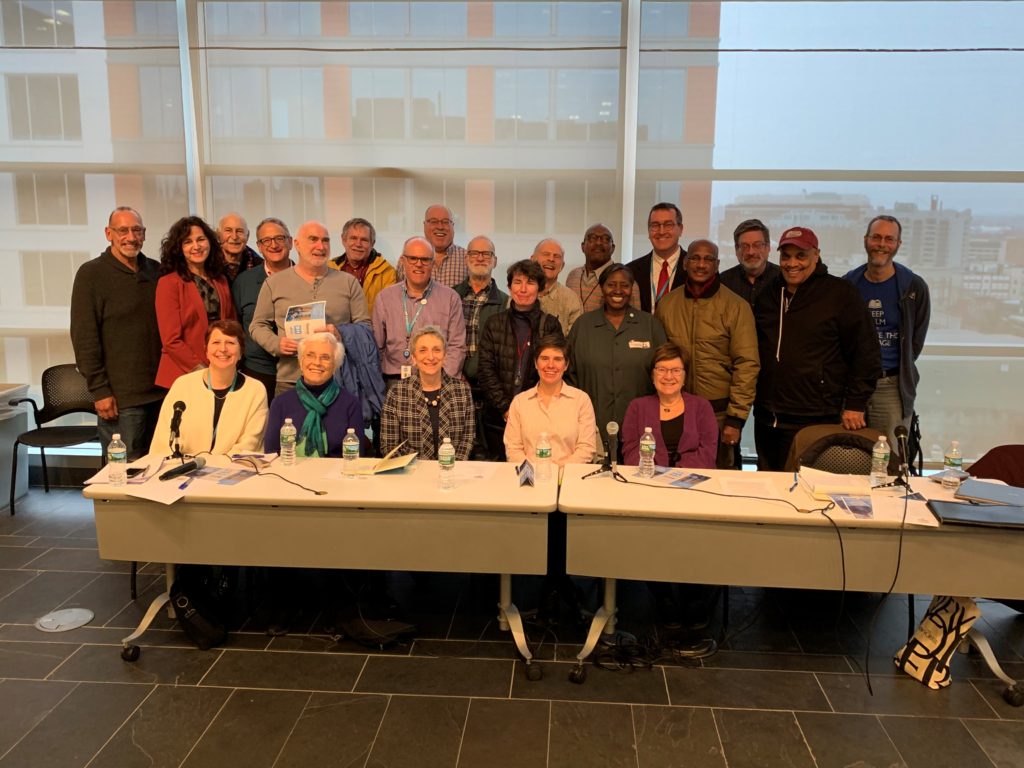 LGBTQIA+ older adults expressed concerns about growing older in Massachusetts at a listening session of the Massachusetts Commission on LGBT Aging held at Fenway Health December 10. Questions and comments ranged from wondering whether staff at assisted living and nursing care facilities have the experience necessary to meet their healthcare needs to descriptions of what it’s like to deal with racism in addition to anti-LGBTQIA+ bias, and requesting ideas for help with social isolation.

At least five of the 25 LGBTQIA+ older adults who attended the session are long-term survivors of HIV.

“If I have to go into a nursing home, as someone living with HIV, how do I know that anyone there will know how to take care of me?” asked one man who had recently been hospitalized on the South Shore only to discover that none of the doctors who saw him were familiar with the complicated needs of long-term survivors of HIV.

Others expressed deep concern about the expense of healthcare insurance. One man said that nearly one-third of his monthly Social Security check went toward HIV-related healthcare costs not covered by insurance.

Nearly all of the long-term HIV survivors who spoke at the session had been affected by a recent decision by the state to change the eligibility requirements of the Massachusetts Insurance Connection, a program which was created to cover gaps in health care insurance commonly faced by long-term survivors of HIV.

Others described feeling socially isolated in an increasingly fragmented and disconnected LGBTQIA+ culture. “I barely leave my house because there’s no place to go,” one commented.

Several talked about the complexity of having to deal with racism in addition to anti-LGBTQIA+ bias and noted that it was not uncommon to experience racism from white members of the LGBTQIA+ community.

“It’s hostile. It’s unforgiving. I have been in this community for a long time and I am astounded at how exclusive it continues to be,” said one man.

Still others noted that they simply did not feel comfortable approaching councils on aging and other agencies affiliated with state and local government.

“I grew up in a time when you didn’t ask for help,” one said, referring to the fact that until relatively recently, police routinely harassed or even arrested LGBTQIA+ people. Their alleged transgressions were never more than engaging in same-sex sexual behavior or violating gender variance laws prohibiting women from wearing men’s clothing and vice versa.

Some also noted that they simply didn’t want to have to deal with heterosexual people who are “set in their ways” regarding LGBTQIA+ people.

“It’s very hard. There are people in their 70s and 80s who have their opinions and they’re not going to change,” one said.

Lisa Krinsky, Director of the LGBT Aging Project at The Fenway Institute of Fenway Health and a member of the LGBT Aging Commission, noted that LGBTQIA+ older adults face all of the same issues related to aging as the general population. “But some of these issues are exacerbated for our elders and there’s a real sense of urgency. We are making real progress, but our elders need housing and culturally competent, affirming healthcare now,” she said.

The listening session hosted by Fenway Health was the third this year. The first was held on the Cape in June. The second was held in Pittsfield in September.

“These listening sessions are critical to the Commission’s work,” said Commission Co-Chair and state Senator Pat Jehlen (D-Somerville), who led the Dec. 10 event along with her fellow Commission Co-Chair state Rep. Ruth Balser (D-Newton). “They help us understand what the current issues and challenges are across the Commonwealth. Hearing directly from our constituents allows us to listen and make recommendations to improve access to benefits and services where appropriate and necessary.” Also attending was Commission member Carole Malone, Assistant Secretary of the Massachusetts Executive Office of Elder Affairs.

Listening sessions held in 2015 informed a report that made broad recommendations to the state government, culminating in a law enacted in 2018 requiring LGBTQIA+ elder cultural competency training for all elder care agencies contracting with the Commonwealth’s Executive Office of Elder Affairs. Massachusetts is the first state in the country to enact such a comprehensive training requirement.

The Commission is currently advocating for passage of “An act relative to home care eligibility” which would expand elder home care program services to be available to people with HIV age 50 and older. Currently one must be 60 or older to be eligible for such services. As numerous speakers noted, long-term HIV survivors age more quickly as a consequence of many of the early AIDS medications they were treated with and which had powerful side effects. HIV also causes chronic inflammation, which can correlate with earlier onset of some health conditions.

Since the 2015 report the LGBT Aging Commission has been studying a number of key areas including health, housing, and social connections for LGBTQIA+ older adults and their caregivers. It is now completing a new round of listening sessions across the Commonwealth.

A list of resources for LGBTQIA+ older adults can be found here: https://fenwayhealth.org/the-fenway-institute/lgbt-aging-project/programs-support-groups/