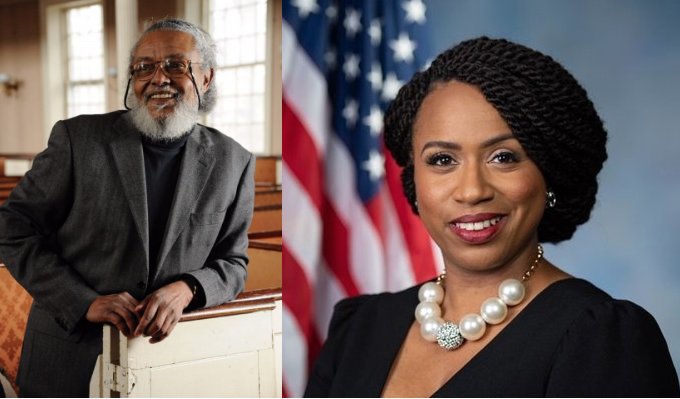 Byron Rushing served in the Massachusetts House of Representatives from 1983 to 2018. He came to the House with a work background of community organizing and of Afro-American history.

Rushing was an original sponsor of the gay rights bill and the chief sponsor of the law to end discrimination on the basis of sexual orientation in public schools. He was one of the leaders in the constitutional convention to maintain same sex marriage in Massachusetts. He successfully co-sponsored the transgender civil rights bills.

In the legislature, Rushing’s priorities were human and civil rights, including housing and health care for all. He was the House Majority Whip. He was a leader of the Commonwealth’s anti-apartheid efforts and a sponsor of the Commonwealth’s twinning relationship with the Province of the Eastern Cape in South Africa. He was the chief sponsor of the Massachusetts Burma law.

He successfully sponsored legislation to create the Commission to develop a comprehensive plan to end homelessness in the Commonwealth. He sponsored the law for the over-the-counter sale of sterile needles and the law creating statewide guidelines for hospitals dealing with violence victims. He was a chief sponsor of legislation for substance abuse “treatment on demand.” Rushing co-chaired the state’s Health Disparities Council and was chief cosponsor of the law establishing a permanent disparities office in the Department of Public Health.

Fenway Health presents The Fenway Health LGBTQ Impact Award at The Men’s Event to honor and celebrate a man, group of men, and/or organization whose actions manifest positive leadership, visibility, and impact, for the gay, bisexual and trans male community and inspire others to strive for personal excellence and the betterment of society.

Representative Ayanna Pressley currently serves the 7th District of Massachusetts – which includes the Fenway/Kenmore neighborhoods – after winning a historic election in the 2018 midterms. Previously, she served as an at-large member of the Boston City Council. Pressley is both the first black woman elected to the Boston City Council and the first black woman elected to Congress from Massachusetts.

Pressley was first elected to the Boston City Council in November 2009. Upon being sworn in on January 4, 2010, she was the first woman of color to serve in the 100-year history of the Boston City Council. As the only woman in a field of 15 candidates, Pressley earned one of four at-large spots on the city’s 13-member council. Prior to her election, Ayanna worked as an aide to Sen. John Kerry, as well as Congressman Joseph P. Kennedy II.

From day one in office, Pressley advocated for vulnerable populations. In her first year as a City Councilor, Pressley formed the Committee on Healthy Women, Families, and Communities, which addresses issues such as domestic violence, child abuse, and human trafficking. She worked collaboratively with community members to develop a comprehensive sexual education and health curriculum and update the expectant and parenting student policy. Both were successfully implemented into Boston Public Schools.

Pressley is a strong supporter of universal health care and Medicare-For-All. As a survivor of sexual violence herself, Pressley states that she would make ending sexual violence a major priority of her work in Congress. Pressley has dedicated her career to eradicating poverty and fighting for underserved communities.

“I will sit at the table, and compromise and work with anyone in the name of progress,” Pressley said. “But there are things that I’m unwilling to compromise and to negotiate on, and that is the rights of women, of immigrants, of workers, and the LGBTQIA community.”

The Dr. Susan M. Love Award is given at The Dinner Party to honor and celebrate a woman and/or organization that has made a significant contribution to the field of women’s health. The Love Award is given in honor of its founding recipient, Dr. Susan M. Love, a pioneer in the fields of women’s health and breast cancer. Love helped found the Revlon/UCLA Breast Center in 1992 and currently heads up the Dr. Susan Love Research Foundation, which is dedicated to eradicating breast cancer.