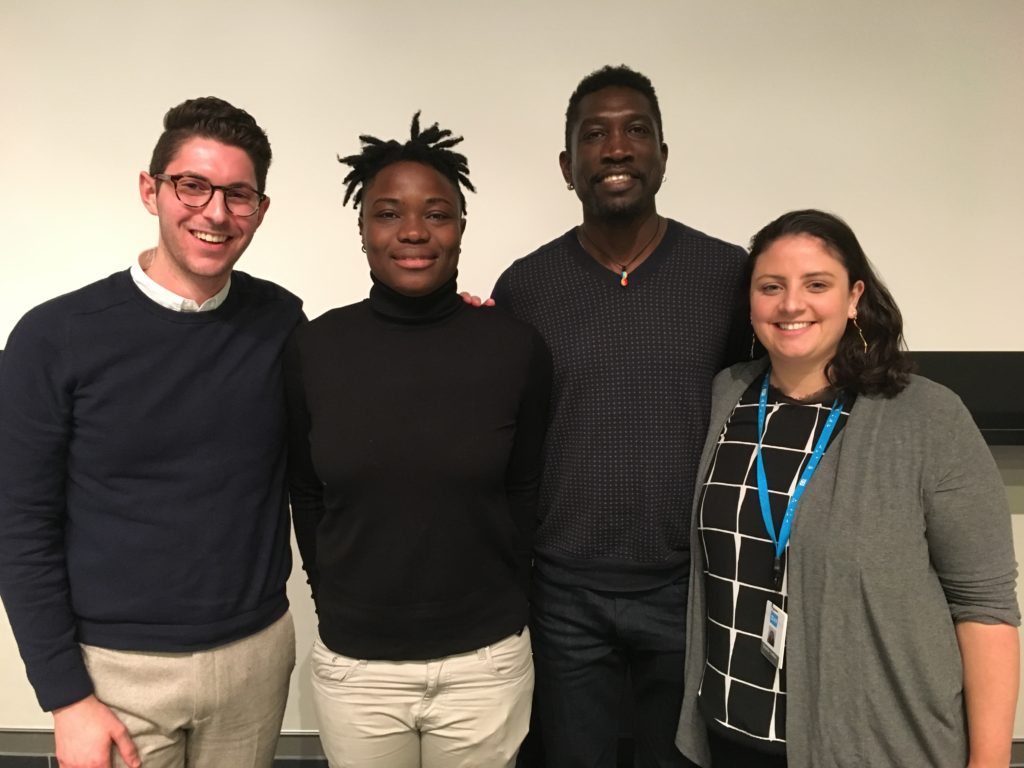 In honor of International Human Rights Day on Sunday, December 10, The Fenway Institute hosted a community panel on December 11 on the state of LGBT rights in Africa. As of 2015, homosexuality was outlawed in 34 African countries, and LGBT people across the continent face discrimination, violence, and incarceration. This important discussion was organized by the Health Policy Research department at The Fenway Institute and was moderated by Sophia Geffen, HIV Prevention Research Project Manager at The Fenway Institute.

Panelists – John Abdallah Wambere, Gaelle Tjat, and Nicholas Diamond spoke candidly about their experiences as LGBT people living and working in Africa, and offered their perspectives on advancing the human rights of LGBT people on the continent.

John Wambere, aka Longjones, is a Ugandan LGBTIQ /Human Rights/HIV and AIDS Activist. Longjones is a Recipient of the Logo TV International Trailblazers Award 2014, and he was featured in a documentary Call Me Kuchu, which depicts the lives of LGBTI Ugandans. Call Me Kuchu won the GLAAD Media Award for Outstanding Documentary.

Gaelle Tjat is a Cameroonian human rights activist, freelance journalist and IT professional. She is also an award winning blogger for “Recto Verso,” a blog on LGBT issues in Africa.

Nicholas Diamond is the Marketing and Communications Manager for CAMTech at Massachusetts General Hospital Global Health. He focuses on sex, sexuality, gender, and health and has used health communications to share stories from the Senegalese, Nigerian, Cameroonian, and Ugandan LGBT communities.

The history of European colonialism influenced much of modern day Africa’s laws regarding LGBT people, Geffen explained, and rarely for the better. Most of the anti-homosexual sodomy laws were introduced by colonial powers. “A lot of times Western involvement in African countries may do more harm than good for LGBT rights,” she said. Western religious evangelism has particularly resulted in negative effects for LGBT Africans. In Uganda, anti-LGBT activist and Massachusetts resident Scott Lively organized a conference in Uganda, and months later a draconian bill mandating death for “unrepentant homosexuals” was introduced into Uganda’s Parliament.

“We have to ask ourselves how organizations outside of Africa can provide aid without threatening the safety and security of LGBT Africans,” Geffen added.

During the panel, the speakers explained the plight of African LGBT asylum seekers, many of who are fleeing threats of violence or even death for their sexuality, gender presentation, or activism. Differential vulnerability—how a person’s social status or treatment varies depending on their situation and environment—plays a key role in the experiences of LGBT Africans. Depending on how women are valued—or not valued—within a society, for example, may affect how lesbians are viewed versus gay men.

LGBT African asylum seekers in America may be hesitant to connect with social service providers, especially from their own countries, for fear of word getting back home and putting their family or friends in danger. This fear, coupled with past trauma, makes it particularly challenging to access culturally competent care.

Despite the great challenges facing LGBT Africans, there are still many vibrant LGBT enclaves across the continent and activists risking their lives to create change. They are a true testimony to the strength and resiliency of the community.

“I hope people understand that Africa is a diverse place with many different types of people, and the issues facing LGBT Africans are important to everyone around the world – it’s not ‘us’ versus ‘them;’ our struggles are interconnected,” Geffen said. “One way we can get involved is by supporting grassroots efforts, such as John Wambere’s fundraiser, which will provide LGBT Ugandans with economic empowerment through vocational training.”