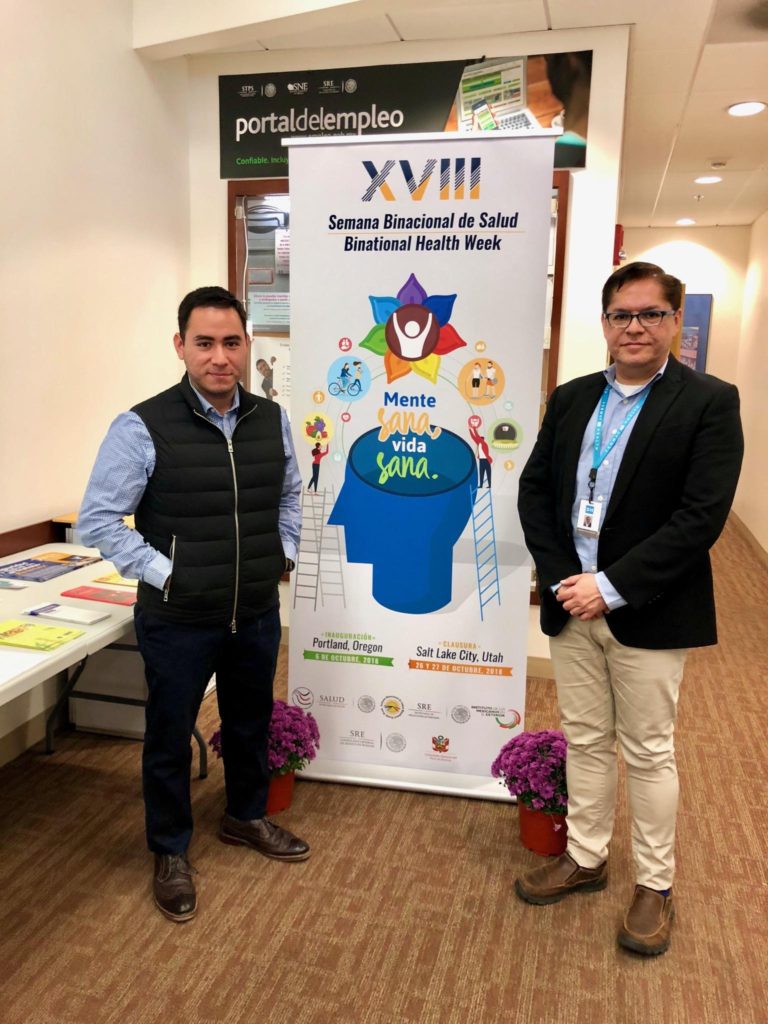 Fenway Health staff Gerardo Moreno Serrano, Bilingual Psychotherapist, and Jonathan Briseño, Bilingual Counselor Advocate for the Violence Recovery Program, presented on October 26 at the Consulate General of Mexico in Boston as part of Binational Health Week. Gerardo and Jonathan discussed mental health issues such as depression, anxiety, stress management, healthy relationships, domestic violence, sexuality/gender identity, negative/positive coping skills, and self-care. Better understanding of these behavioral health topics are key to improving the health and well-being of the underserved Latinx population that lives in the United States and Canada, especially those Latinx people who are also sexual or gender identity minorities.

Binational Health Week (BHW) has evolved into one of the largest mobilization efforts in the Americas to improve the health and well-being of the underserved Latinx population that lives in the United States and Canada. During BHW, federal, state and local government agencies, community-based organizations and thousands of volunteers come together in the month of October to conduct a series of health promotion and health education activities including workshops, insurance referrals, vaccinations and medical screenings.

BHW fosters community solidarity by bringing together existing resources and thousands of volunteers working together for a common goal. Its success is the result of collaboration among Latin American consulates, community, and government agencies from the U.S., Mexico and other Latin American countries with the purpose of reaching out to the most disadvantaged and vulnerable people, especially those without medical coverage.

The main agencies that support BHW are the Secretariats of Health and Foreign Affairs of Mexico, the Ministries of Foreign Affairs of Colombia, Guatemala, Honduras, and Peru, as well as the Centers for Disease Control and Prevention, several Departments of Public Health, the Council of Mexican Federations in North America, and the Health Initiative of the Americas, a program of the University of California – Berkeley School of Public Health.