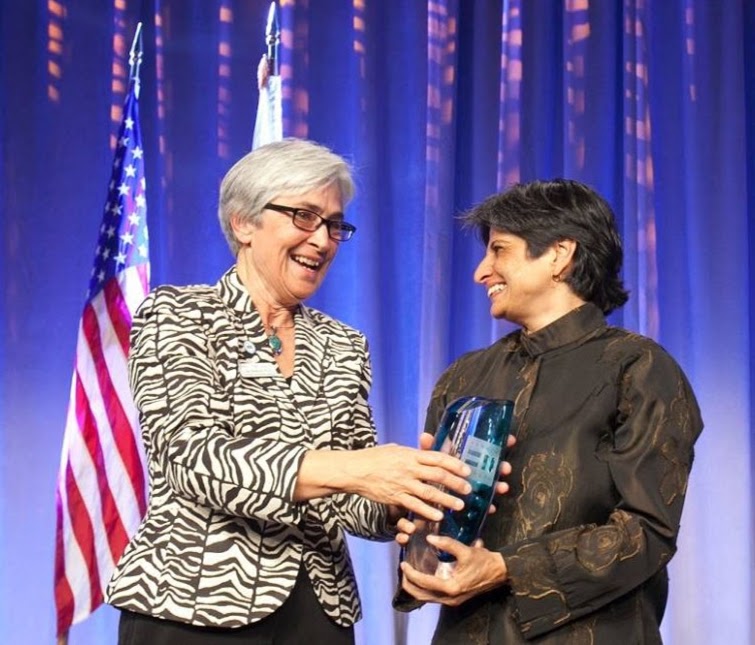 Urvashi Vaid is presented the Love Award by Dr. Judy Bradford at the 2012 Dinner Party.

The world lost a true visionary this weekend with the passing of Urvashi Vaid, a celebrated attorney, award-winning author, and trailblazing LGBTQIA+ activist. Vaid, 63, died on May 14 at her home in New York City after a battle with cancer.

Vaid’s legacy of social justice work spanned decades. From 1983 to 1986, she was staff attorney at the National Prison Project of the American Civil Liberties Union, heading the organization’s work on HIV/AIDS in prisons. After starting as Media Director, she served as Executive Director of the National LGBTQ Task Force from 1989 to 1992, and would go on to direct the Task Force’s Policy Institute and become a co-founder of the Creating Change conference.

“Like so many who came of age as queer people and AIDS activists in the early 1990’s, I was both awed and deeply inspired by Urvashi’s profound eloquence, her fierceness and passion, her capacity to lead, and by her warm and beautiful heart,” said Fenway Health CEO Ellen LaPointe. “She consistently centered the interwoven intersectionalities that are inherent in our fight for equality. She was relentless, and she urged us not to compromise. And she helped us understand that we all have a role to play in our shared struggle. While the full impact of Urvashi’s leadership and example is beyond measure, we know that the best way to honor her legacy is to double down in our efforts to continue the fight. I am grateful and honored to have known her.”

Vaid was a tireless advocate for HIV policy reform and health care justice, and did not hesitate to shake up systems of power. During a 1990 press conference on AIDS by former U.S. President George H.W. Bush, Vaid famously held up a sign reading “Talk Is Cheap, AIDS Funding is Not.” Her powerful statement brought attention to the failed policies of the administration and put much needed pressure on the government to increase funding for HIV/AIDS services.

“I had the honor and privilege of working with Urvashi at the National Gay and Lesbian Task Force Policy Institute from 1999 to 2001, and after that, the even greater honor of becoming friends with her and Kate,” said Dr. Sean Cahill, Director of Health Policy Research at The Fenway Institute. “Urvashi was a visionary, and a veritable idea machine. In meetings, she would come up with several brilliant ideas; we would struggle to get them all down on paper and then try to implement some of them. Working with Urvashi and other community leaders, we launched the Racial and Economic Justice Initiative and the Aging Initiative. These projects led to groundbreaking research on the experiences and priorities of LGBT people of color, including the largest-ever Black Pride Survey and Asian Pacific Islander LGBT Survey. Together, we analyzed the impact of welfare reform and homeless services and policy on our communities. We produced Outing Age: Public Policy Issues Affecting GLBT Elders, and Transgender Equality: A Handbook for Activists and Policymakers.”

In 1995, Vaid wrote Stonewall Book Award-winning Virtual Equality: The Mainstreaming of Gay and Lesbian Liberation, which explored and critiqued the modern gay rights movement. She advocated for the movement’s focus to be on protecting the most marginalized members of the LGBTQIA+ community.

In 2012, Vaid founded LPAC, the first lesbian Super PAC, to support political candidates who are committed to legislation promoting social justice and LGBTQIA+ rights. She was founder of The Vaid Group, a social innovation consultancy that advises individuals and organizations working to advance equity, justice and inclusion both globally and domestically. Vaid also made time for extensive philanthropic work, serving as Executive Director of the Arcus Foundation, Deputy Director of Governance and Civil Society Unit of the Ford Foundation, and on the board of the Gill Foundation.

“I was very saddened to learn of Urvashi’s untimely passing,” said Dr. Kenneth Mayer, Medical Research Director and Co-Chair of The Fenway Institute. “From her early days as a law student activist at Northeastern Law School to her leadership of The National LGBTQ Task Force, she was a brilliant and articulate leader in the struggles for sexual and gender minority equality. She was thoughtful and strategic, very capable of creating change and reaching policy makers through her writing, her lucid oratory, and community organizing. She will be greatly missed.”

Locally, Vaid was a supporter and attendee of the Fenway Health Dinner Party. She received the Dr. Susan M. Love Award at the 2012 Dinner Party, and presented the same award to the late Dr. Judy Bradford in 2015.

Vaid is survived by her longtime partner, political humorist Kate Clinton; her sibling, activist and performance artist Alok Vaid-Menon; other family, friends, and colleagues; and the entire LGBTQIA+ community.

“I am grateful I had the chance to work with Urvashi and learn from her strategic brilliance, warmth, and optimism,” Cahill said. “I feel like those qualities are needed now more than ever. My deepest condolences to Kate Clinton, other family members, and to Urvashi’s broader queer family.”