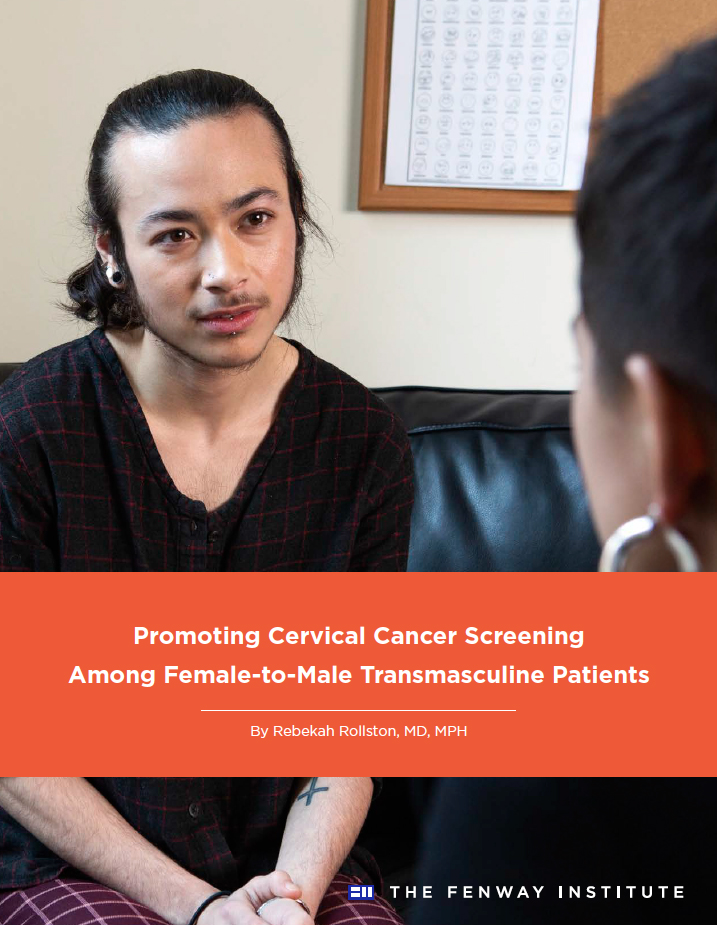 BOSTON, May 22, 2019―Today, The Fenway Institute of Fenway Health released a policy brief with recommendations for reducing rates of cervical cancer among transmasculine patients who were assigned a female sex at birth but have a gender identity that lies on the diverse spectrum of masculinity. Although over 90 percent of such patients retain female reproductive organs, they are screened for cervical cancer at much lower rates than cisgender women—people who were assigned a female sex at birth and identify as female. This puts them at greater risk for cervical cancer.

The policy brief, “Promoting Cervical Cancer Screening Among Female-To-Male Transmasculine Patients.” can be downloaded as a PDF here.

“Cervical cancer used to be one of the deadliest gynecological cancers. But innovations in cervical cancer screening and immunization have made it one of the most preventable cancers among people with female reproductive organs,” said Rebekah Rollston, MD, MPH, author of the policy brief, “Promoting Cervical Cancer Screening Among Female-To-Male Transmasculine Patients.” “Unfortunately, we know from research that some healthcare providers erroneously believe that transmasculine patients are at a low risk for cervical cancer, which isn’t true.”

Current guidelines of the American Cancer Society and U.S. Preventive Services Task Force do not mention transmasculine patients. But the American College of Obstetricians and Gynecologists recommends that transmasculine patients receive the same cervical cancer screenings as cisgender women. These screenings include a regular Pap test every three years until age 29 and every five years from ages 30 to 65 if testing for the Human Papilloma Virus (HPV), which is the primary cause of cervical cancer, is also done. But among all people who should be regularly screened for cervical cancer, only 27 percent of transmasculine patients receive them as compared with 43 percent of cisgender women, according to the 2015 National Transgender Discrimination Survey.

“Another complicating factor is that transgender people have lower rates of health insurance coverage than the general population. Health insurance is tightly linked with full-time employment, but transgender people have much higher rates of unemployment than the general population due to stigma and discrimination,” said Sean Cahill, PhD, Director of Health Policy Research at The Fenway Institute, and an editor of the policy brief. “Even transgender people with health insurance often avoid care due to past experiences of discrimination in healthcare settings, such as being deliberately misgendered, or fear of such discrimination. And it is not uncommon for transmasculine patients to experience significant body dysphoria during a cervical cancer screening and avoid them as a result.”

Since 1971, Fenway Health has been working to make life healthier for the people in our neighborhood, the LGBT community, people living with HIV/AIDS and the broader population.  The Fenway Institute at Fenway Health is an interdisciplinary center for research, training, education and policy development focusing on national and international health issues. Fenway’s Sidney Borum Jr. Health Center cares for youth and young adults ages 12 to 29 who may not feel comfortable going anywhere else, including those who are LGBT or just figuring things out; homeless; struggling with substance use; or living with HIV/AIDS.  In 2013, AIDS Action Committee of Massachusetts joined the Fenway Health family, allowing both organizations to improve delivery of care and services across the state and beyond.