Musings on a Prior Pandemic, Part Two: Research Trials and Tribulations 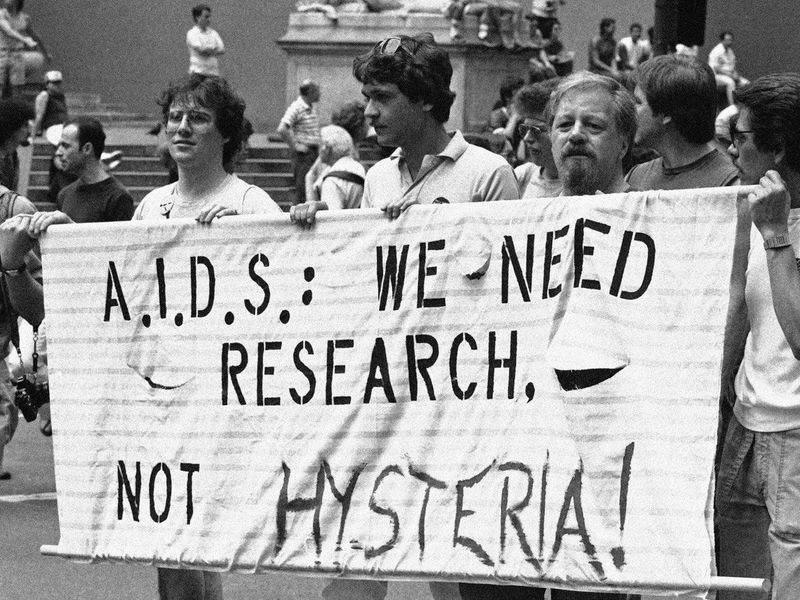 It was 1983, and the recently named AIDS epidemic was growing at a terrifying rate. In Boston, the small staff of Fenway Community Health Center – an affirming health care beacon for the gay community at that time – was working to build research collaborations with larger institutions that were beginning to examine this mysterious and devastating new disease.

One of our collaborators was Dr. Jerome Groopman, who was a hematologist-oncologist at New England Deaconess Hospital. We referred all of our patients who developed Kaposi’s Sarcoma and lymphomas to him. In late 1983, he contacted me because he knew that we were collecting blood samples from people who were asymptomatic sex partners of people with AIDS and taking histories so we could tease out factors associated with staying healthy versus becoming sick with AIDS. He told me he had met Dr. Robert Gallo of the National Cancer Institute at a research conference, and that Gallo thought that he had found the causative agent for this epidemic. Jerry suggested that we send Dr. Gallo a bunch of unidentified specimens to be from people who were sick or asymptomatic.

A few weeks later, we got back the results from the Gallo lab, which identified that all of the sick people had antibodies to the putative cause of AIDS (initially known as HTLV-III, and now known as HIV-1), and about 21% of the asymptomatic people had similar antibodies, as well. The next several years of work in our group was spent following the people who tested positive, but were asymptomatic, to better understand why it is some people stayed asymptomatic for longer periods of time than others, and could some people be able to be long term progressors, i.e. have essentially acquired immunity from their exposure to the pathogen. Unfortunately, as time wore on, the vast majority of individuals became sick, and it turned out that non-progressors were as rare as hens’ teeth. These were the bad old days: recognizing a burgeoning pandemic, without effective prophylaxis, treatment, cures, or vaccines.

Because of our community-based research infrastructure and the fact that we were caring for many people with AIDS, we were approached by many different groups to collaborate. Some of the hypotheses that people put forth were absurd, but it became clear that AIDS was a cipher for many individuals to project their view of the universe, whether it was a unique immunologic hypothesis or aspirational thinking. I became used to urgent calls from colleagues, who either had the “cure” or some unique insight that would arrest the viral spread. Unfortunately, the decade between 1985, when the first antibody tests to detect HIV became widely available, and 1995, when combination antiretroviral therapy was shown to improve health and decrease mortality, was a grim period, with limited therapeutic options and understanding of how to best address the depradations of the malign retrovirus.

Many people living with HIV became frustrated with the pace of research in the late 1980s. This frustration led to the creation of the direct action group ACT UP, which pushed the federal and academic research establishments to expedite evaluation of drugs. At our center, and other community-based settings around the country, many of our patients were also involved in this activism. We were prodded to move more quickly to evaluate new approaches.

One of the most devastating opportunistic infections affecting people with HIV was Pneumocystis jiroveci pneumonia. Sulfa drugs were most effective in treating this pathogen and preventing recurrences, but ironically, HIV-positive people seemed to have a greater propensity toward sulfa allergies. This led to a development of an approach to deliver medication through an inhalation route. One of the most potent medicines for this technique was Pentamidine, which when given systemically was quite toxic but much better tolerated with administered as an aerosol. To administer these aerosols most safely, creative groups designed boxes that looked like telephone booths, which allowed for sequestered inhalation. We got the protocol to design these systems from colleagues in San Francisco, so we could administer the aerosol on site.

Some academic colleagues questioned why a community organization was doing an experimental treatment and reported the health center to the state health regulators. Fortunately, the Chair of the Board of Fenway was a very capable attorney, and was able to go to the state health regulators and make the case for why it was appropriate to provide this medication. The booths were soon adopted by all local health facilities taking care of people with AIDS. The experience was a wake-up call for us to create the type of infrastructure that could enable the center to do other community-based research studies in the future.

The moments of drama were recurrent prior to the advent of effective therapy. Our Executive Director met a charismatic neuroscientist named Dr. Candice Pert who had developed a neurochemical, called Peptide T, and based on limited animal data, she felt it had the ability to improve clinical functioning of people with AIDS. Her academic medical colleagues were generally unimpressed by the data, but because there was community interest and we determined the medication was not harmful, we studied it. We constituted an independent institutional review board in order to evaluate the ethics of this clinical research. The trial was conducted flawlessly. Unfortunately, nothing ever came of Peptide T, but the interactions of the charismatic investigator, passionate activists, and the more traditional research community had the makings of a made-for-TV movie.

After a colleague at Brown University asked me to help him conduct an extramural review of the NIH’s AIDS program, for the better part of 1986, I went down to Washington frequently to attend meetings in which leaders of the NIH presented their research portfolio to an external panel of academic advisors. The one person who stood out in all of these discussions was Dr. Anthony Fauci, who at the time had a completely dark head of hair, and had recently taken over as the Director of the National Institute of Allergy and Infectious Diseases after running their immunoregulation laboratory. Dr. Fauci clearly recognized the gravity of the unfolding AIDS epidemic, and demonstrated intellectual curiosity in understanding people’s behavior and motivations for advocating specific points of view. These meetings were just prior to the advent of Act Up and for several years whenever I would see him at meetings, I recognized the challenge he had mediating between the less than adequate responses of the Reagan Administration, and activists whom he increasingly came to know and respect. It’s a testimony to his intellectual rigor and fortitude that his agency has led the way in supporting fundamental research that has helped to change the AIDS epidemic from something that was uniformly fatal to a chronic manageable infection.

The insights derived from the epidemic have informed all of our subsequent disease research, most notably now with the COVID-19 pandemic. The differences between HIV and COVID-19 are dramatic. After more than four decades with HIV, we don’t have effective vaccines and certainly don’t have a cure, yet ironically, many of the insights that led to control of the HIV epidemic are informing how COVID-19 research is moving forward.